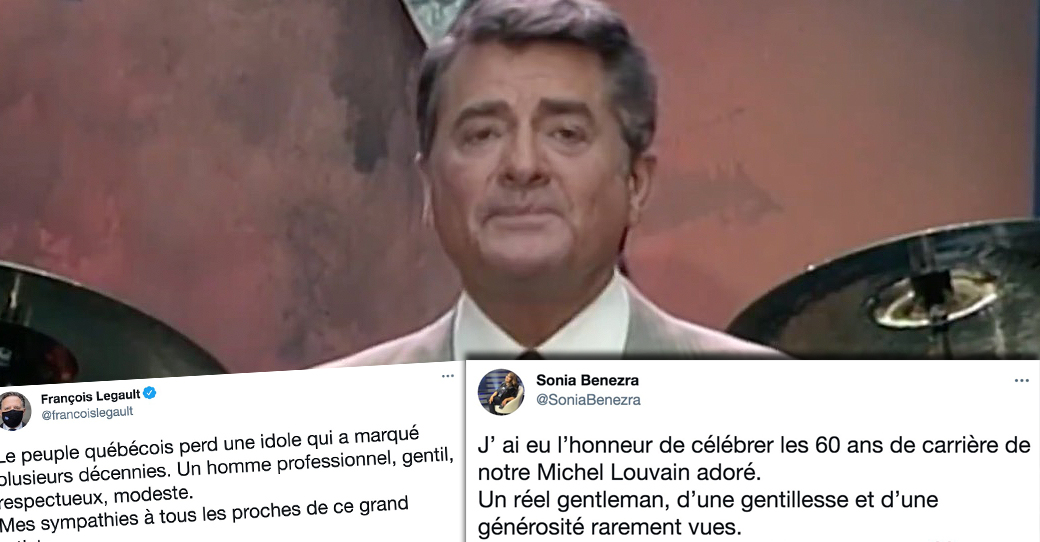 Several artists and public figures publish on social networks a tribute / a magical moment with the singer Michel Louvain. He died yesterday at the age of 83 at the Center hospitalier de Verdun, in Montreal. This music icon has marked many people and here are touching testimonials about him.

[Last hour] Singer Michel Louvain died at the age of 83, a few days after his hospitalization

During 60 years of artistic life, he has always had immense respect and affection for his audience.

The people of Quebec are losing an idol that has marked several decades. A professional, kind, respectful, modest man.
My sympathies to all those close to this great artist.https://t.co/hsYNmQicTD

Souvenir of Michel Louvain on the set of "La petite Seduction" in NB taking his hour of dinner to go and sing "La dame en bleu" ac cappella to the ladies of the residence! A real lesson in showbiz and respect! RIP Michel Leuven

Michel.💔He was infinite kindness like heaven, forgiveness to those who for too long did not understand his greatness, the legend proving that myths exist. My grandmother's favorite, who passed her passion on to me. Michel Louvain. Your certain smile is immortal. pic.twitter.com/jLVuOGSpih

I learn with great sadness, the death of one of our giants of the variety show world. One of the greats of Quebec song. Michel Louvain. A man of great generosity the very embodiment of dignity and respect for his audience. Goodbye Michel and thank you🥲 # RIP pic.twitter.com/Twt2YDM4J2

How sad to learn of the death of Michel Louvain, a great man of the song, who rallied many faithful to TV with "In good humor" and "Louvain à la carte". His presence at “Children of TV” this season gave rise to strong moments of emotion. pic.twitter.com/w39JtlffKj

I had the honor of celebrating the 60-year career of our beloved Michel Louvain.
A real gentleman, with a kindness and generosity rarely seen.
We just lost a legend, a real one💔
My condolences to all his loved ones, I am so sad🙏🏻 pic.twitter.com/4bublxG3z3

Class, elegance, humanity and humor… The definition of a gentleman. I keep warm and tender memories of Michel Louvain and our meetings. My condolences to her lover, her family and her friends. pic.twitter.com/JoDL9U3XHX

RIP Michel Louvain. A gentleman with whom I had the honor to share the stage one evening at the Metropolis. A pure pro. A real. I will remember the love and respect he had for the audience.

I had this chance, this summer ...

"I'm afraid I'm too old or sick after COVID to be able to continue my career… I can't believe it's going to end up boring like this."

Sad news the death of Michel Louvain. Sweet thoughts for his entourage and his fans. I've been lucky enough to be around him for the past few years, lovely man!

All my condolences to the relatives of Mr. Michel Louvain. A great Brossardois, an undeniable talent, an unequaled tenacity but, above all, a warmth and a humility which will have marked more than a generation and which we will miss, here… and in Florida!#polqc

Michel Louvain is dead. He was a very nice man, my aunt Gisèle's favorite. A few years ago, he told me that he liked to walk around Florida listening to his own covers of Brel songs recorded in the 60s. I like the picture. #michellouvain pic.twitter.com/5pAeYS8AiU