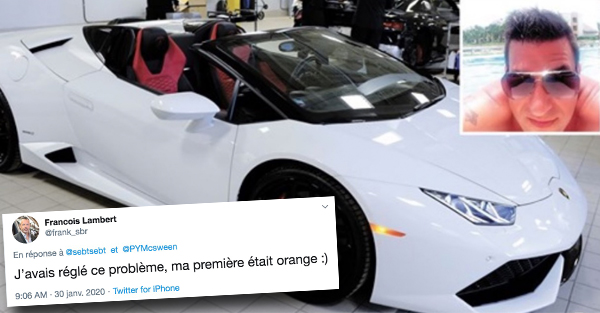 best articles
Made in QC

Here is THE news that everyone finds quite funny today. The text Devastated because his Lamborghini was turning yellow published on the TVA Nouvelles website explains a whole saga of car buying, wealth and a dealership.

Here is a summary of the situation:

- Horror! We want more of this damn tank there white or yellow we do not really know!

- There followed a series of exchanges between the wealthy businessman and the dealer ... and the car was returned (after 1400 km of use… even if it is yellow, it looks like the car is driving the same!)

- There the dealership offered to repaint the car, change parts and pay $ 8000 in compensation… but it was re-fu-sé (like the Julie Snyder show, not the one on V but the other on TVA… crime… the Banker here hey do I win a prize? a Lambo? please?)

Well the summary is done (yeah I could have just put a link to the article ... anyway)! It didn't take much more to inspire Internet users with hilarious comments. You had to know

A publication shared by Petit Petit Gamin (@petitpetitgaminofficiel) the 22 Jan 2020 to 3: 59 PST