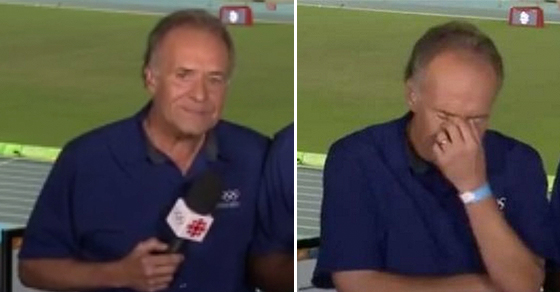 Pierre Houde cracks, and bursts into tears live on Radio-Canada

I really like Pierre Houde, he is an excellent commentator and a true professional. Always pleasant when he comments on the games of the Montreal Canadiens, Pierre also has a mandate to work on the Olympics. After describing the men's 100m final, Pierre confided in saying that he thought a lot about his friend and late colleague Richard Garneau. Richard's dream was to cover 25 Olympic Games, but he only had time to do 23. You can see Pierre shed a few tears for his friend, Pierre Houde is a man of heart.

A moving moment followed the broadcast of the men's 100m#Rio2016#RCOlympics https://t.co/7L2VDEQDqx

Keywords
garneaugamesPaul HoudeQuébec Radio-Canadarichard
previous article
Annie Dufresne makes a transphobic comment on Twitter. Coeur de Pirate puts it in its place!
next article
Your head dreams of this little hammock that allows you to sleep on a plane