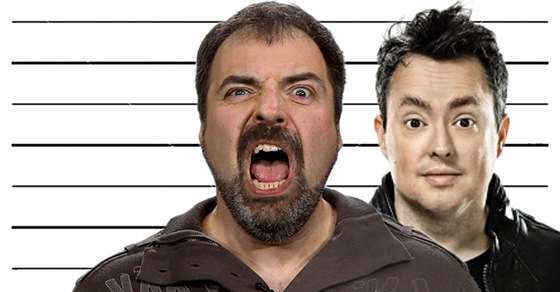 The saga involving Mike Ward and little Jeremy has not finished talking. Earlier today we were talking to you about a Mike Ward post on Facebook which has garnered more than 23 likes. It is now the turn of the humorist Jean-François Mercier to empty his heart on this situation / this trial. In a lucid / well-explained text, JF Mercier gives us his opinion and tells us about his friend Mike Ward. The post already has over 000 likes and 15 comments. Here's what the comedian wrote:

In the case between Mike Ward and Jérémie Gabriel, we all have the impression of being on the side of the good. Some who say, a handicapped person doesn't laugh and if it were that simple, I would agree but in Mike's case it's not that at all. If I thought Mike wanted to laugh at his condition and make fun of him, I wouldn't have laughed. I am for free speech and against bullying. The way Mike's words are stupidly reported by the media completely out of context, of course there is a scandal. Mike wishes little Jeremy to drown and he laughs at him! I'm still a little surprised to have to explain that Mike doesn't really want him to drown. It's a humorous process. The violence of the words that are used to respond to the offense is so excessive that we know that it is not serious. It's a bit like someone saying, I would kill to eat a “peanut butter toast”. He wouldn't really kill for that. This is an exaggeration. It's a joke. Stop treating jokes as opinions.

The context of Mike's issue is as follows. He does an issue where he talks about the untouchables in Quebec. He makes jokes about the untouchables, little Jérémie, Céline Dion and he grazes himself in the process. It is a subject that has not been exploited much, which requires a lot of courage (or unconsciousness depending on the point of view) and intelligence to be treated and even if it does not suit your business, it is artistically valid to approach this subject there. It is not a comfortable subject because the nature of the subject pushes you into taboos. You say you are going to laugh at the untouchables in Quebec, now you have to do it, otherwise, it falls flat. He manages to crumble the room with laughter and the laughing world, these are not monsters who laugh at the misfortune of others or morons without genius who will laugh at anything ... stop thinking yourself above everybody. I guarantee you that's not it. These are people who have the intelligence and the distance to understand that it is humor and not a comedian who uses his platform to plant a handicapped child as it is presented everywhere in the media.

And there are some who make me laugh when they say: “Oh yeah, it's humor… well, I don't find that funny! I hope you understand that this can't be our standard of what is presentable or not. Hope you understand that? That you do not laugh, we chalice it! The proof that it is humor is that the world is laughing in the room. If you don't laugh, well you don't laugh and it stops there. I don't know any comedians who keep gags that don't work. Blaming Mike for making gags that make his gym laugh is like blaming the weather girl for announcing rain.

Some say to me: “There are so many other subjects to make people laugh. Well yes, you know what, we also exploit them. Do you want a good one? Well, it shocks people too… because it's not the subject that's shocking, it's the intentions we lend you. I once made an ice cream joke and was into public opinion pro-rape, misogynist and racist, which has nothing to do with who I am.

Can you tell each other the truth? Fools who do not question themselves too much and who are convinced that their moral sense is so superior to yours, they are legion on social networks. To those, I will say to you, “You will forgive me for not giving yourself the importance that you think you have. "

I will end by asking a question. If Mike Ward is really that insensitive and stupid being who laughs at the disabled, why in his personal life has he done more for the disabled than the vast majority of his detractors, long before being sued by the commission? human rights? His detractors, which we should mention in passing, have probably laughed or otherwise abused weaker people somewhere in their life and I can guarantee you, they didn't bother to wrap this in an issue. humor. People who at the same time will tell you: “What an asshole, this Mike Ward! And "Business is business!" "

This debate, it touches you more than you think because the freedom of expression, it is precisely the business which allows you to write that Mike Ward is a ben "safe" asshole behind your keyboard , without knowing anything about his life.

Stop writing to me that I disappointed you. Honestly, it always pains me to disappoint people, but I'm ...

Keywords
humoristhumorhaberdashermikeQuébecward
previous article
Eugenie Bouchard has a new boyfriend
next article
Rumor: Jean Lapierre would be on the plane that crashed in the Magdalen Islands?